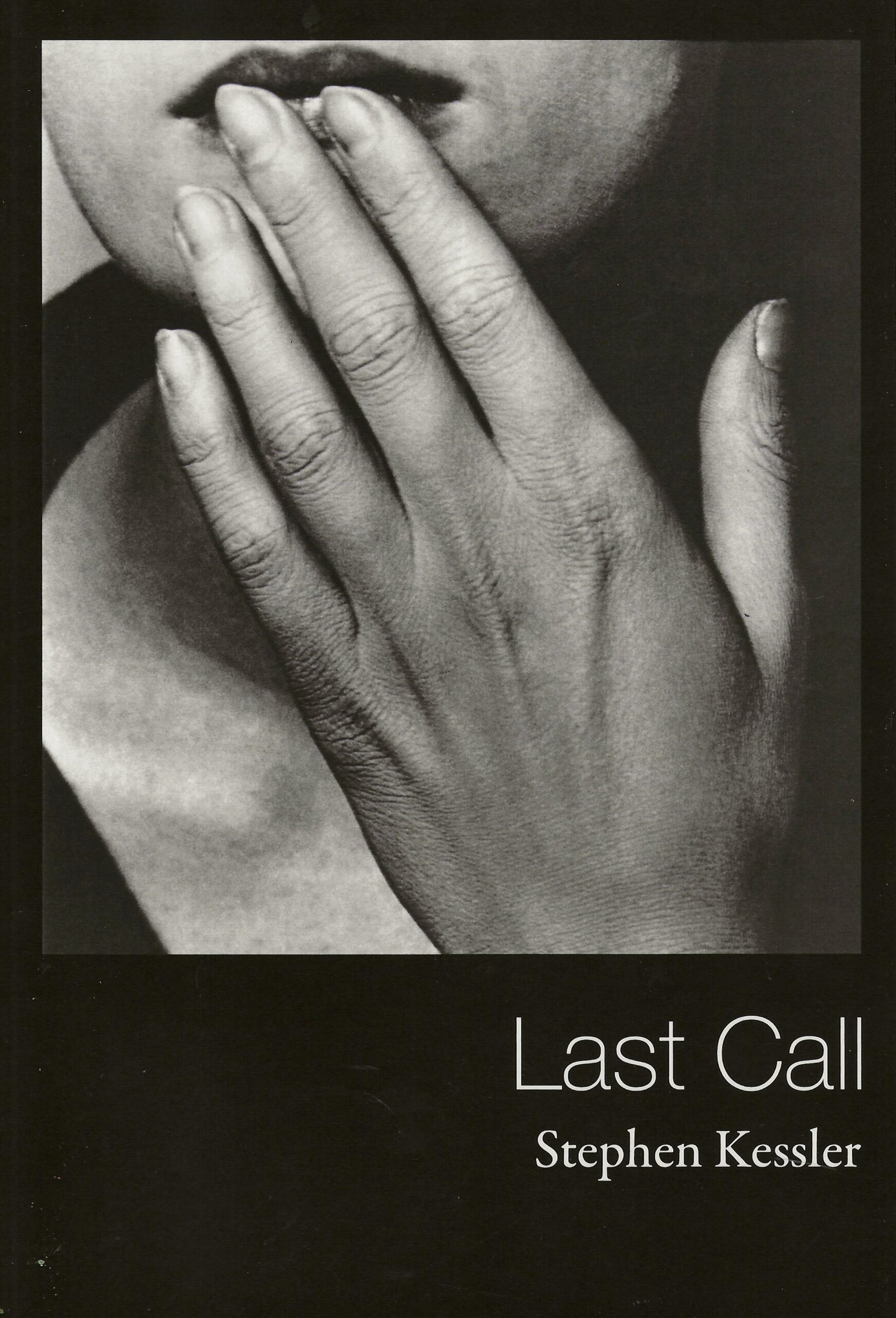 GT: Briefly tell us about how this collection of poems came about. What time period did they span? Where do they fit in your oeuvre?

STEPHEN KESSLER: My books tend to coincide with periods or “chapters” in my life. The poems in Last Call were written between January 2017, when I turned 70, and February of this year when I received my first Covid vaccination. Those years happened to coincide with two terrible events in the personal and the public realm: the breakup of my marriage and the presidency of Donald Trump. So there was a lot of tough material to process, which accounts for the sense of grief and loss, especially in the first section of the book, “Bad Luck Charms.” My hope was and is through the alchemy of the language to turn all that hurt into something else—including ironic distance—the same way singing the blues can transform pain and heartbreak into something beautiful and consoling, maybe even funny.

You’re known for the jazz syncopation of your poems, the way the lines stride and swing into each other. Do you read the work aloud as you write? Or only afterward? How does it work?

I write by hand on paper (or with occasional exceptions on a manual typewriter) and try to let my hand do the thinking guided by the technical skills I’ve developed over about 65 years of practice, just as a jazz musician typically improvises spontaneously without reflection, letting the trained ear and fingers direct where the melody is going. I hear it in my head as it’s being written and try to just let it rip according to where the sounds of the language lead. Then I may read it to myself in a whisper to feel how it tastes as much as to hear how it sounds. If it feels more or less like natural speech but spring-loaded for torque from one line to the next, that’s the effect I’m hoping for. Sometimes it comes out right the first time, and at other times it requires revision. But I always let it sit for a while to let it cool off so I can have a more objective look—and listen—at what I’ve written. If it’s not working, and I can’t fix it with a few adjustments, I tend to set it aside and move on to the next one, rather than try to save every poem by revising as extensively as I did when I was younger.

I see more willingness to indulge in alliterative lines, in internal rhymes within the lines themselves. Were you consciously expanding your style in this collection?

Alliteration, internal rhyme, vowel rhyme and other prosodic devices have always served as my tools and techniques of composition, so I don’t see how this book is any different in that respect from most of my earlier work. But one’s style evolves, and I enjoy surprising myself from one line, one poem, and certainly one book to the next. At this stage of the game, I’m less concerned with writing a perfect poem (or a perfect book) than in letting the lines move to their own measure, so in that respect, they may feel more indulgent or expansive in some way. But as I said, I’ve been reading and writing verse for so long—since childhood—that I feel enough confidence in my technical chops to let the poem take its own organic form. So there are lots of different shapes and sizes and styles of poems in this collection.

Normally I’m accustomed to spending a lot of time at home alone with the writing, so the lockdowns weren’t all that inconvenient for me. But being increasingly old is something I don’t know if anyone ever gets used to, so the physical and psychic realities of entering “old age” (even though 70 is the new 50, and I’m reasonably healthy) play a much bigger part in the composition of this book—only the last year of which, maybe a dozen or 15 poems, was written during the pandemic.

Can you reflect on the bittersweet irony of publishing your most ambitious late-career book and calling it Last Call just when COVID shut down the world? As if the title were the leitmotif of the era itself.

The title came to me very early on, with the poem of that title, which I think was written about four years ago, so the pandemic had nothing to do with it. That poem was literally written at the bar of a local restaurant where the bartender was calling for any last orders before closing. It matched my gloomy mood of the moment and seemed fitting for the late-life themes I was wrestling with. Everyone asks if it’s meant as a valediction, and I think probably not, but then again, you never know.  I certainly intend to keep writing, but that’s not entirely up to me. I expect the world will go on, with or without me.

Much as complex recipes in fine cuisine, this work more than ever lays down opposing riffs—sweet and salty, joy and pain, darkness and clarity. A poet’s-eye view of the rhythm of existence itself?

In writing, as in cooking, I use whatever ingredients and seasonings are at hand. I definitely prefer a book—my own or anyone else’s—that moves through a range of themes and moods and motifs rather than repeats a formula over and over. Doesn’t everyone go through different rhythms of existence? Looking back over some 50 years of publishing, I feel as if I’ve consistently tried to respond as honestly as possible to the full range of my lived experience. I just hope I’ve gone deep enough that the poems resonate with the experience of others.

In your work, you never draw attention to craft—form, composition, conscious/slant rhyming. Yet I have to admire the impeccable line breaks like some of these in “Last Call”:

Does the spontaneous observation trump craft in your work? Or were these poems different in feel/form?

What you call “craft” I call technique, and it’s baked into the writing in a way that’s inseparable from imagination or observation, just as form and content in the best poems are seamlessly integrated. I learned the fundamentals when I was in elementary school by reading (for fun!) traditional English poetry (my family had a paperback copy of Palgrave’s Golden Treasury of Songs and Lyrical Poems) and writing imitations of rhymed and metered verse—usually just to entertain my friends.  I wrote the lyrics to the class song for both grade school and high school graduations.  I learned to write a poem for any occasion. Most of those efforts, when they weren’t intentionally funny, were no good as poetry except in a formal sense: they scanned metrically according to whatever form I was imitating, and they rhymed at the ends of the lines.  So listening for rhythm and rhyme became habitual, and by the time, around 18 or 19, I started writing “free verse”—a misnomer because it demands even more formal control than fixed forms, requires that you create your own form on the blank page—these prosodic principles were ingrained in me.

It took me many more years, decades even, to learn to deploy them effectively in composition, but by now, I’ve been doing it for so long that the form the poem takes is second nature and almost unconscious until I look and see what I’ve done. In the case of the title poem you quote from, the length of the lines was determined by the width of the notebook page I was writing on; the breaks just happened to work as written, so I didn’t mess with it.  Other poems written in the same pocket notebook came out completely different because I heard the breaks fall in different places.

Some poems in this collection are only a few words wide, forcing me to read downward (vertically) in a single gulp. Others stretch more words across the page, slowing down your voice and the reader’s intake. How do these decisions come to you?

Funny, for me, short lines tend to slow a poem down, and long lines move more swiftly across the page. That just shows how we all read differently. As noted above, in some cases, it’s the width of the page I’m writing on, or in the case of “Borges’s Belt,” it was the strip of paper I was typing on as the poem describes its own physical creation. “Paisley Yours” is in the voice of the model in the middle of a magazine page, and the narrow white space on either side of the image determined the long skinny shape of the poem as I typed it on my 1974 Adler manual portable. Others may start as prose in the first draft, and once I see the whole thing, I find where the breaks belong. And still, others are composed originally as verse because the lines come to me one at a time, and that’s the way I set them down. Most of these decisions make themselves according to how the composition unfolds. I don’t have any rational method; it’s a much more intuitive process based on the measure I hear in my head.  I find the formal openness yet technical precision required of “free verse” as mysterious and unpredictable as to how the poem’s images are imagined—usually by sonic association more than conscious choice. At best, I feel like a medium or an amanuensis to the muses, just taking dictation.

Do you know when the words are good?

Usually—but not how. Sometimes in real-time as they’re set down; at other times only later, from a more detached perspective. In some ways, it’s easier to know when they’re not so good when they’re clunky or prosaic or just “off” in some way. When the good ones are coming, I’m too caught in the flow to really understand what’s happening, and when I see what I’ve done, I can’t figure out how it happened—composition as possession. I’ve learned to surrender to whatever it is that’s got hold of me, usually some kind of rhythmic riff, a few words strung together, a phrase unfolding according to its own melodic logic.  And it feels good when the words are good—so I guess that’s how I know.

An appreciation: “Discourse on Distraction” is a disarming piece of rumination, in which you move from the almost Platonic general down to the tangible specific. The last lines are among your finest, in which you speak to the man within the poet:

there is no escaping the script you write with every step,
the strange rhymes ringing amid the dissonance,
the gifts, the great griefs,
the peripheral visions.

Visit stephenkessler.com for ‘Last Call’ and Kessler’s other work.

Next ArticleStill No Decision on Watsonville Interim City Manager Appointment