.Tracing the History of the Burger 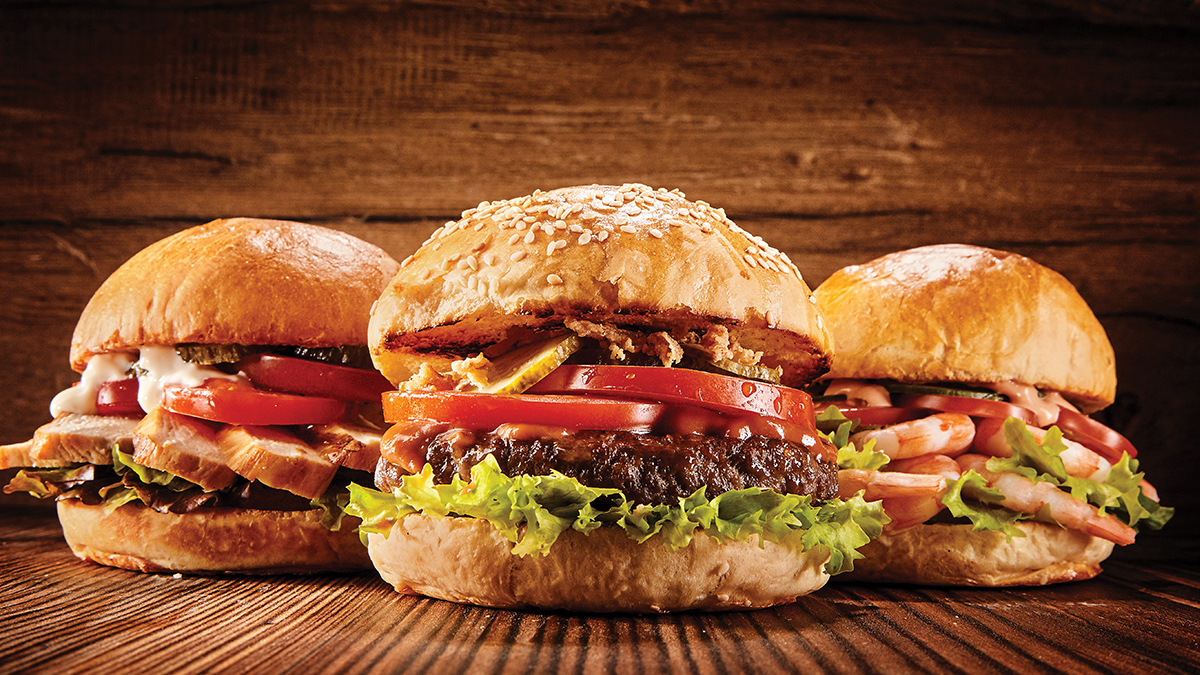 From the dawn of the baby boomer right up until today, there has always been a hamburger on the American menu.

It was the go-to casual lunch item. It was an easy-eatin’ patio dining staple. Anybody could make one and every menu offered one. Nobody didn’t like a hamburger it seems, at least in those days before the meat-free lifestyle became a thing. Since the launch of McDonald’s and Burger King in the 1950s there have been hamburger joints all over the planet. McDonald’s sells 75 hamburgers per second, according to an article six year ago in Parade Magazine (which means that number has probably quintupled by now). Ergo it’s a big, big deal, the hamburger.

If you just dropped in from Mars and wanted a big, juicy, classic burger, almost any restaurant would be able to comply, especially in Santa Cruz. Gabriella’s is opulent. Oswald’s is textbook. Parish Publick House’s is righteous. Upmarket Alderwood made sure it had a serious burger in place the minute it opened last year. Cafe Cruz has burgers so good you want to live there permanently.

It’s as simple as a patty of ground beef, grilled and served on a bun with tomato, lettuce, onions, pickles and condiments that include ketchup, mayo, and mustard. So popular is the entire concept of a hamburger that in the 21st century of diversity dining, it has even spawned a vegetarian döppelganger called the Impossible Burger. It seems inevitable that those desiring a burger, just without the meat, would devise a way to turn soy protein into something to satisfy that craving. That the hamburger is a popular, ubiquitous item on mainstream menus and on many home dining tables cannot be questioned.

Perhaps the real question is twofold: Where did it come from, and why do we love it?

The first question leads into the murky zone of meta-history, which lies very close to urban mythology and fake news. Let’s see if we can trace origins through the name itself. No, there isn’t ham in a hamburger. Yes, there is a town in northern Germany named Hamburg, where people have loved meat in many forms for a long time. In the 18th century there was something called the Hamburg steak, made from beef that had been minced, mixed with some seasonings and formed into patties. The Hamburg steak might trace its ancestry to Genghis Khan and his buddies who invaded Russia and introduced minced meat, a version of steak tartare, to what is now Germany. Hamburg was one of those port towns doing a brisk trade with Russia and steak tartare quickly morphed into the Hamburg steak, a patty of minced beef served with onions and capers.

Sounds close, right? But someone had to finish the equation. That someone might have been a German immigrant, arriving in New York and opening a restaurant. Doing what they knew best, they might have started offering Hamburg steaks on their menus (sort of a German cousin to the very similar Salisbury steak, which many recall from the mid-20th century infancy of the TV dinner). The Salisbury steak also involved minced or ground beef but included gravy. No gravy on a Hamburg steak.

As early as 1876, Delmonico’s in New York offered a Hamburg steak on its menu. The Boston Cooking School Cookbook published in 1844 included a recipe for Broiled Meat Cakes, which involved chopping lean, raw beef into a fine mince, shaping it into small flat cakes, and broiling.

What was lacking was the bun, so that the meat patty could be easy to eat while standing, sitting in a car, walking, picnicking, and on one’s lunch break.

Once liberated from its original identity issue—trying to be a steak—the hamburger came into its own as a patty of ground beef usually fried or grilled into submission, placed between toasted halves of a bun, and consumed with French fries or onion rings. (Okay, and/or potato chips.)

The Bilby Family of Tulsa, Okla., claims to have been the first to put a hamburger on a bun before serving. Surely it didn’t take long for folks to realize that a hot slab of beef can wreak havoc with slices of bread. Bread didn’t have the staying power—the gravitas, if you will—to contain the burger plus its hot juices. It was probably the St. Louis World’s Fair in 1904 (see Vincent Minnelli’s Meet Me in St. Louis, starring Judy Garland, for reference), that put the hamburger as we know it on the U.S. map.

Paul Cocking of Gabriella Cafe claims a few distinctions for his burger. It arrives wrapped in Blue Heron farms butter lettuce, plus the bun is made with a focaccia dough. “Puts it over the top,” he claims. And many diners agree. Geoff Hargrave from East End Gastropub says that his burger made of 100% grass fed beef with lettuce, onion, homemade pickles and house sauce on a locally-baked bun “has become a staple among our regulars.” At Solaire, the Black and Blue Burger is made of blackened Angus topped with blue cheese aioli. Mmm! And the Oswald folks do their version on a brioche bun plus housemade aioli and seasonal toppings from caramelized Izard onions in winter to cornichons in summer.

Yes, the burger has come a long way from the days of Genghis Khan and his steak tartare-loving hordes. However you like them, impossible or 100% grass-fed, they are a delicious fixture of American dining.

So, why do we love the hamburger? Maybe because it’s gooey, hot, delicious, loaded with unctuous flavor and involves all the flavor groups except sugar.

But we probably love the hamburger because we can.