.Who Has the Power to Reopen California Classrooms? 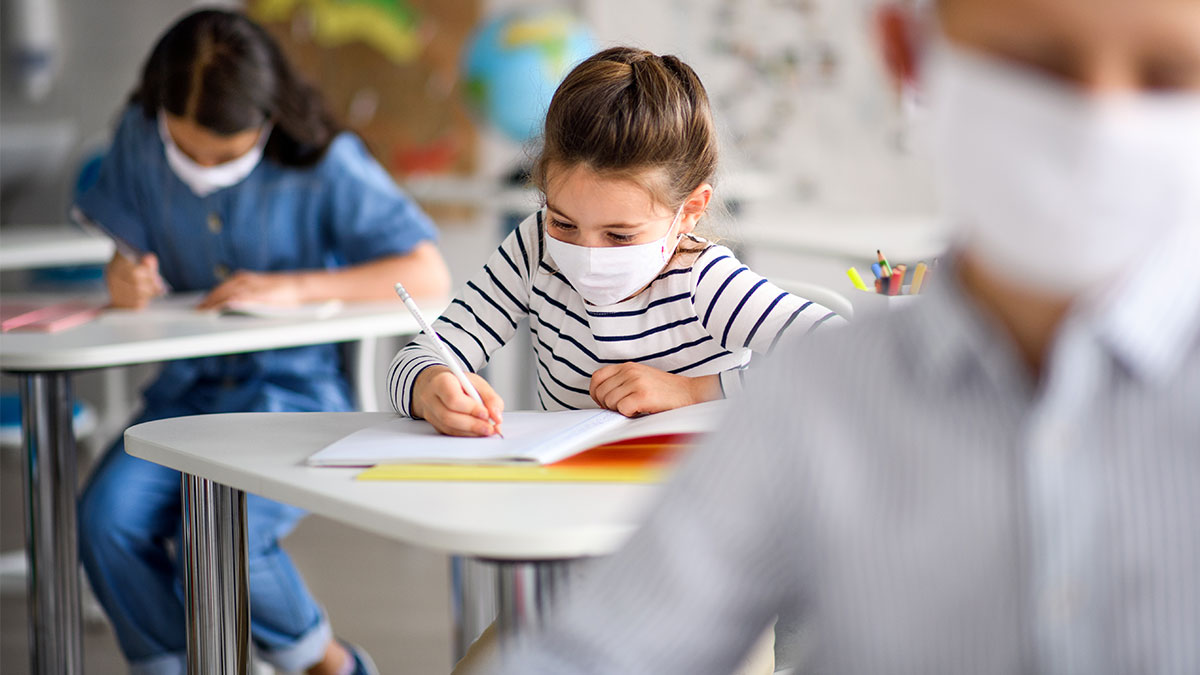 Increasingly exasperated that most public schools remain closed even as coronavirus cases plummet nearly a year into the pandemic, California parents are taking to the streets.

They’re protesting in Los Angeles and Silicon Valley. They’re trying to recall school board members in San Francisco and San Ramon. They’re mounting billboards along freeways in Sonoma County and Sacramento demanding that the government #OpenSchoolsNow.

The campaign to recall Democratic Gov. Gavin Newsom has seized on the frustrations. Republicans hoping to replace him are staging campaign events outside shuttered schools and highlighting that California lags the rest of the nation when it comes to getting kids back in the classroom. Newsom’s political future may hinge, in part, on how much longer millions of children remain stuck on Zoom.

But the state’s education system is incredibly fragmented, with more than 1,000 school districts tasked with deciding — mostly through negotiations with their local labor unions — when and how to reopen. Those districts must follow laws crafted by a Legislature with close ties to organized labor, and signed by a governor who was elected with the support of the teachers’ union but now finds himself at odds with it over his objections to making vaccine access a requirement for reopening.

Districts in San Diego, Long Beach and Berkeley recently struck deals to reopen this spring. But despite pediatricians and infectious disease experts saying it’s safe to open schools as long as precautions are in place, many large districts say they won’t be able to without new direction from the state Capitol. Newsom and legislative leaders have so far been unable to agree on a plan that could prod more schools to bring students back to campus.

“The fundamental breakdown here is a big struggle between management and labor on what ought to exist at the state level regarding the rules around reopening,” said Kevin Gordon, a lobbyist who represents numerous school districts. “That’s 100% of the problem.”

Two-thirds of California adults supported Newsom’s proposal to spend $2 billion to reopen elementary schools by mid-February, according to a January survey by the Public Policy Institute of California. With that date come and gone, and the plan stalled, parents this week asked Newsom to open schools “through whatever means necessary.”

But teacher union leaders remain fearful that it may not be safe. Some schools that have reopened have seen isolated outbreaks, and a new coronavirus variant could make people sicker and vaccines less effective. A state website that was supposed to show the public which schools have had COVID cases among students or employees has yet to publish any data.

And teacher unions have enormous sway in California politics. In the last four years, the California Teachers Association has given $10.7 million to the California Democratic Party. It also spent $5.6 million on legislative races and $1.1 million supporting Newsom. And it donated $5 million to an assortment of local school board races, Democratic central committees and local union accounts.

Amid this confusing tangle of power, it’s hard to figure out who’s responsible for whether California kids will get back in the classroom. Here’s what we know:

What can the governor do?

Newsom could compel reopenings by using his emergency power during the pandemic to temporarily suspend the law that requires districts to negotiate with local labor unions, argues Carl Cohn, a former superintendent of schools in San Diego and Long Beach. Instead of the uneven process of a thousand separate labor negotiations in each district, he said, the governor should make one deal with the statewide teachers’ union.

“As we all face that extraordinary anniversary March 13, where kids will have been out of school for a full year, I just think you have to think out of the box,” Cohn said in an interview. “You’ve got to figure out a way to solve this.”

Newsom did not answer reporters’ questions this week when asked if he would consider suspending local bargaining or negotiate a statewide deal. He said he’s hashing out a new reopening plan with legislative leaders and is not ready to publicize the details.

He did use his executive authority to set aside 10% of the state’s vaccines for teachers and other school employees — an attempt to address the union’s argument that workers shouldn’t go back to campus unless they’ve been offered the shots. Newsom says he’s prioritizing school workers for vaccines with a focus on disadvantaged communities and has arranged dedicated inoculation drives for educators in Oakland and Los Angeles.

His administration has issued guidance on safety precautions schools must take, and gave districts three months worth of face masks. And he’s been using his bully pulpit to make the case that schools should reopen, holding press conferences to highlight communities that are vaccinating teachers and making plans to bring students back to campus.

But Newsom said “one size does not fit all,” and he’s so far resisted doing anything to usurp local control from school districts and their employee unions.

His Republican challengers Kevin Faulconer and John Cox said they would not suspend local bargaining.

What about financial incentives?

The school reopening plan the governor unveiled in December — which floundered amid criticism — called for giving districts extra money if they return to in-person instruction, but didn’t compel them to do so. School leaders said that would wind up rewarding districts that were better positioned to reopen, while punishing those that couldn’t.

In that approach, Newsom has strange company: Faulconer, the GOP former mayor of San Diego, also suggested using financial incentives to reopen schools. During a campaign stop in Sacramento this week, Faulconer said if he were governor, he would tie state funding to in-person attendance. Asked how that differed from what Newsom tried unsuccessfully, Faulconer could not provide details.

What can the Legislature do?

Lawmakers tried to compel districts to get students back on campus with a bill saying they must have a reopening plan within two weeks of exiting the state’s purple tier for the most severe rates of infection. The proposal was inspired by legislators’ frustration that most schools did not bring students back during the fall, even though they were allowed to because COVID cases were low.

“Local control has been a complete failure,” said Assemblymember Phil Ting, a San Francisco Democrat who wrote the bill.

But Ting canceled a hearing on the legislation and instead helped write a new reopening plan that essentially gives local districts and their unions more control. It requires districts to negotiate reopening with their labor unions, and gives them a financial incentive — but not a mandate — to bring students back to campus by April 15. Newsom said the plan would slow down reopening in too many districts, and indicated he would not sign it into law.

“If there are no mandates, then essentially what you’re still bound by is the collective bargaining process in each district,” said Megan Bacigalupi of Oakland, who created a parent advocacy group called Open Schools California. “If there was a requirement that at certain case rates you’d have to reopen, then you would see much more progress across the state, especially in the big urban districts where it’s been the slowest.”

Teachers’ unions want local school districts and unions — not the state — to decide when and how schools should open. But they also want the state to issue more safety requirements, including vaccines for school employees, improved ventilation, procedures for disinfecting campuses and routine COVID testing.

“We need something that’s going to be uniform so that we know that if a school up in Ukiah is open and a school down in San Diego is open, they are open because it’s safe,” said Toby Boyd, president of the California Teachers Association.

Kevin Gordon, the school district lobbyist, said the Legislature should focus on sending money to districts, and then “get out of the way.”

“The idea of inviting the state into the details of the local bargaining process is what’s gotten a lot of this so complicated,” Gordon said.

What can school districts do?

Many districts have been able to open under existing rules that require more spacing between desks and other safety precautions. About half of California’s school districts offer in-person learning, though most of them are only bringing some students on campus, or are in a hybrid mode where students spend part of the time in class and part online.

But the vast majority of California students remain entirely online because the districts that have reopened so far are mostly quite small. About three-quarters of the state’s elementary students and 86% of high schoolers are in districts that do not provide any in-person learning. A CalMatters analysis found vast inequities — overall, students in wealthier regions are going to school, while those in cities with more poverty are home on Zoom.

“Almost everything is driven locally,” said Tony De Marco, an attorney who works with school districts in Los Angeles, Orange and San Diego counties. “It starts really with the community and how much the community is pushing their local board members and their local districts to reopen — and to what degree.”

Though labor negotiations are the norm in school districts, many smaller ones have reopened without formal agreements with their unions, said Edgar Zazueta, a lobbyist for the Association of California School Administrators.

“In many districts, they just had a relationship with their employees that didn’t require them opening up new bargaining agreements. They still worked together and sought input,” he said. “Many just operated under existing (agreements) that didn’t deal with specific COVID mitigation issues.”

So do teachers unions have the final say?

Some communities made plans to come back to school without formal labor negotiations, and some schools were prevented from reopening because of public health orders from the state or county. So unions are not the only deciding factor.

But they play a big role in urban districts such as Los Angeles, Oakland and Sacramento, where tensions between labor and district management predate the pandemic. A statewide reopening plan that’s blessed by the California Teachers Association would smooth reopening in such districts, said Bruce Fuller, a UC Berkeley education professor.

Statewide “labor leaders need to feel like a safe and fair deal has been struck with the Legislature and the governor, because they need to signal that back to the remaining locals that are dragging their feet,” he said.

“If there is uncertainty or a lack of trust at the state level, we will be back to every union local being able to veto an agreement.”

Senate leader Toni Atkins said it’s hard to imagine the state crafting a plan that would force reopening if employees don’t agree: “The goal is really to have willing partners, because you can’t go back to school without teachers.”

But some Democrats are hoping the state’s Democratic leaders will not give unions the last word on reopening schools. Mike Trujillo, a Democratic consultant who works with charter schools and politicians who support them, said the state should compel districts to open their classrooms without requiring agreements from local unions.

“The communities who are most impacted by this are the communities that don’t have a bullhorn to shout out that they want their schools opened,” he said. “This is the time to do what’s right for Latino and African American families up and down the state.”

Next ArticleHow Santa Cruz Tasting Rooms Are Navigating the Pandemic